My name is Arshak Ardeshir, Senior Game Designer on theHunter: Call of the Wild. Some of you might know me from such classics as “The Stream about the Bloodhound” and “Behind the Scenes: Developing the Bloodhound”.

I’m here to present a classic “How it’s Made” episode, and today’s star of the show is the humble Layout Float Blind.

Why did we choose the Layout Float Blind?

A Game Designer’s job is to add value for the player. One way we do this is by creating different types of experiences that allow the game to be played in various ways. The Layout Float Blind was conceived with this focus in mind.

As you might already know, the newest reserve to release for theHunter: Call of the Wild is Finland’s Revontuli Coast, and with it, the Waterfowl Rework. With the addition of many new upland birds and waterfowl, we looked at interesting ways the player could engage with these animals.

Traditionally, in theHunter: Call of the Wild, waterfowl are hunted from the shoreline. While this gives you an excellent opportunity to hunt birds, we wanted to expand on that and create new ways of hunting the waterfowl — we wanted to give the player a chance to get closer to waterfowl in their natural habitat.

When we release a reserve we normally also add some type of tool or weapon, but this time we wanted to find another way to add value. While we want the tool to be extra useful to its linked reserve, we also need to consider the bigger picture, so we asked ourselves questions like: What can you do with this tool in other places? What other animals would be fun to hunt with the Layout Float Blind? 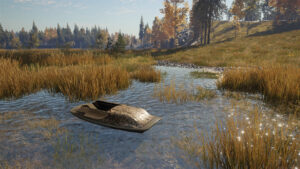 Making sure it works

The struggle when designing tools for the player is to balance the “possibility space” with the “problem space”. While we want the tool to be as cool and useful as possible, we want to limit bugs, issues, and exploits, and while we try our best, we sometimes do fall short.

Sometimes we might allow too much freedom which creates bugs; one of our programmers actually built a bridge out of layout float blinds, jumping from one to the next, spanning a whole lake! Other times, we restrict its use making it less than an ideal tool, but we always keep an eye on you, our community, and try to patch and fix it as we get feedback.

We hope you enjoy the Layout Float Blind and the ability to hunt waterfowl on Revontuli Coast. Please let us know what you think!