It’s me again: Troy Schram, Lead Designer on theHunter: Call of the Wild.

Today we are going to talk about the newest fabled animal to appear in the game alongside the release of Revontuli Coast: the Black Bear Great One!

Why the Black Bear?

Anytime we implement a new Great One, there are several factors we consider when looking at candidate animal species.

Is the animal species part of the base game? Yes. This may seem counterintuitive to what a Great One is, and won’t always be achievable, but we want all players of theHunter: Call of the Wild to have an opportunity to discover one of these fabled legends without needing to purchase additional DLC.

How many reserves does that animal species inhabit? Once again, bang for your buck is part of the deciding factor. We want the Great One to be present across multiple reserves and not just the base game. This gives players a variety of locations and settings in which to hunt a Great One.

What does the community want? We listen, we poll, we do surveys, and we look at analytics for the most hunted animals. Questions like: What do you hunt? How can we make something that already exists better? How can we deliver something to you in the best way possible? For example, a Moose Great One is very vocally asked for right now, but in light of these numerous considerations, we believe the Black Bear Great One will be more widely hunted by the community as a whole. It’s a tricky balance, and there will be players who would prefer another animal, but we always do our best to provide content the overall community can enjoy.

How can we add variety? This is a bit generic, however, we want variety in the pursuit of Great Ones, so in this particular instance, we thought we should take a step away from animal species with Trophies and try something different. This time, it came down to a decision between the Wild Boar, Coyote, and the Black Bear. Ultimately, the Black Bear won out because of the more interesting themes we could do with it.

There were lots of early concept ideas for the Black Bear, from unfortunate but almost comical encounters to even the more fantastical. 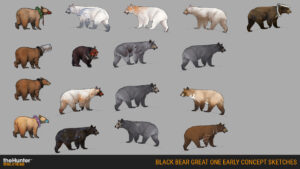 In the end, we knew it needed to be grounded in reality. While Black Bears have been known to get into places they shouldn’t, we ultimately decided not to portray them in ways that could be viewed as cruel. Also, the Black Bear is not a confrontational animal (compared to, say, the Brown Bear), so claw or bite marks from fighting were also a non-starter.

The bigger model had to work with the existing animation rig, so we had to get creative in a couple of poses so the bear wasn’t folding in on itself. And even though we weren’t making a trophied animal, we still wanted to create that sense of chase, so we went pretty hard on the total amount of fur variations compared to previous other Great Ones. 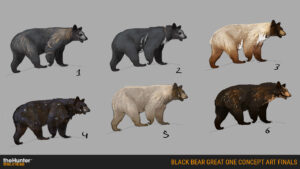 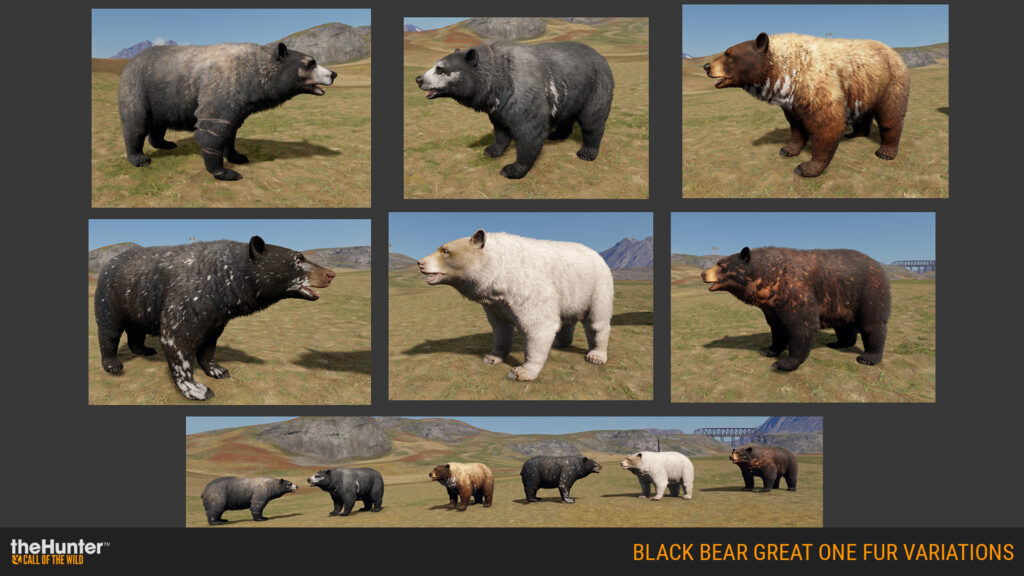 As mentioned previously, we wanted to do a trophyless (read: non-deer) Great One, but how does that work for scoring a Great One? The answer to that is pretty simple: how do we score Black Bears already? That’s right: weight; and with that big CHONKY model we increased the weight scoring for the Great One well above the existing record. So, those of you paying attention to your spot and clue information will know real quick if you have a Great One roaming the reserve with you, or if you need to thin the crowd to potentially make room for one.

The Black Bear Great Ones are something special. They are diverse enough that every player will have a favorite version. Even if the Black Bear isn’t a player’s favorite animal to hunt, they definitely will be paying attention and trying to spot one. Just in case.