My name is Filip Lundbeck and I’m a Graphics Programmer on theHunter: Call of the Wild.

In this developer diary, I’ll be talking about the long-awaited reflex sight bug fix and redesign we’re releasing for free alongside our newest Reserve, Revontuli Coast.

We’ve really rolled our sleeves up with this one with improvements and customizations, and hope you’re as pleased with the outcome as we are! But first, let’s start from the beginning:

It’s Bugged: The Reticle is Too Dark!

An essential part of the red dot sight is to project a light source onto the lens. Our problem was that the reticle only reacted to light. The lens was rendered as a window and with a non-emissive texture applied to it to portray the reticle. This caused the reticle to become darker as the environment darkened and therefore be unusable during the night due to lack of any light source. In conclusion, and presumably due to the lack of resources to modify the Apex engine, this was the best that could be done at the time.

The Quick Fix That Turned Into a Redesign Project

We were aware of the reticle being too big! We don’t pretend to hide the fact that this issue has been on the back burner and a recurring topic of feedback from the community for quite some time. We were also looking into the option of changing the color of the reticle, for people with color blindness. As we were gathering feedback from you, our players, on a variety of places (Steam, Reddit, etc.) we were noticing several complaints. As you might have guessed, the discussion from all of this gradually gained in size and momentum, and eventually turned into a whole design document made by our UI/UX Designer, Ami Tsurugi.

The document laid the groundwork for how the reticle would turn out. It detailed everything from different reticles, lens color, and the accompanying UI and its settings. It also outlined how we expected the reticle to appear in different scenarios (which I hope I did justice in the game). Much to the excitement of the team, the decision was made and the project was approved.

It’s All About the Details: Balancing Visual Appeal and Functionality

One of the larger concerns was how we wanted the reticle to look and function. We could make it simple and design ours similarly to those present in other First Person Shooter (FPS) titles, but as we aimed to stay true to theHunter: Call of the Wild vision—providing that immersive and realistic hunting experience—making the reticle actually feel genuine was a major priority. So, we brought in physical references, researched resources online, and engaged in multiple brainstorming sessions to better understand the look, feel, and functionality of reflex sights.

One thing that became very apparent to implement was the movement of the reticle, to more accurately portray a real-life red dot sight. The reticle on the red dot sight has an infinite projection of a light source onto the lens to correctly point at the target the weapon is aiming at. I personally had a bit of trouble understanding the math behind the projection. After some assistance from our Graphics Programmer Daniel Isheden over at our Apex Engine team, we figured out how to mimic the infinite projection, which essentially turned out as a sequence of mathematical rotations. As we started testing the movement of the reticle, we got reports from our QA team questioning the movement because the weapon did not shoot where it aimed. This evolved into a bigger discussion about whether to focus on function or aesthetics. In the end, we decided on a compromise, we kept the movement but artistically reduced it to make it less obtrusive. 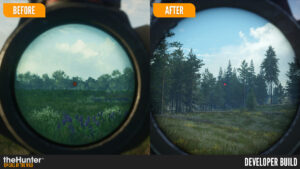 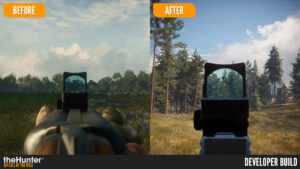 We’re looking forward to seeing and hearing about your experiences with the new and improved red dot reflex sight (soon available in other colors and reticle styles!) and hope you found this read insightful! I also want to give a shoutout to our Content Marketing Manager, Meggles, for helping me turn my notes into a Dev Diary during these busy pre-release times.